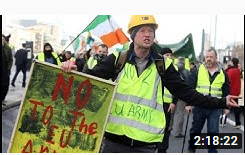 Ireland in Tatters! A Critical Look At Yellow Vest’s List of Demands With Founder Glen Miller

According to Glen Miller, founder of Yellow Vests Ireland, there are 70,000 - 80,000 Refugees Housed in Ireland and 100,000 Homeless people in Ireland! ONLY 8 percent of "refugees" are real refugees - the rest are allowed to stay indefinitely, even if they commit serious crimes... Allastriona takes a critical look at the Irish Yellow Vest movement's list of demands, especially their liberal stance on mass immigration from a fear of being called racist, with Yellow Vest Ireland founder Glen Miller. Ben Gilroy, who is now in jail for contempt of court from opposing evictions, had said that he would rather be a racist than a traitor... https://youtu.be/f8U2UKgCMKg Glen says Government has all the policy on immigration, but no policy on how to return irish citizens back to Ireland. There is also no policy on returning migrants, failed asylum seekers and criminals... In 2014 there was 16.5% poverty in Ireland and it has risen in 2016 to 25% and is certainl
February 25, 2019
1
0