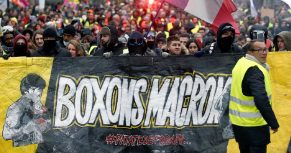 Arrogant Macron Says “I Am A Yellow Vest Too” If It Means A Higher Salary For Him!

After more than two months of Yellow Vest protests against the economic policies of the French government, President Emmanuel Macron claimed that he too could be a ‘yellow vest’ if the movement stands for higher salaries. “If being a yellow vest means wanting fewer parliamentarians and work being paid better, I am a yellow vest, too!” Macron said on Thursday in an attempt to align with the grassroots movement against economic injustice, which was born as a protest against the French government’s policies. In an interview with several French journalists (BFM TV, Paris Match, Le Figaro) he described the Yellow Vests as a social and political movement without “a fixed claim and leader,” as well as saying that it has “mutated” since its inception and has been “infiltrated by 40,000 to 50,000 militants who want the destruction of institutions.” Macron also spoke about the RIC – the “Citizens’ Initiative Referendum” – a referendum demanded
February 1, 2019
3
0