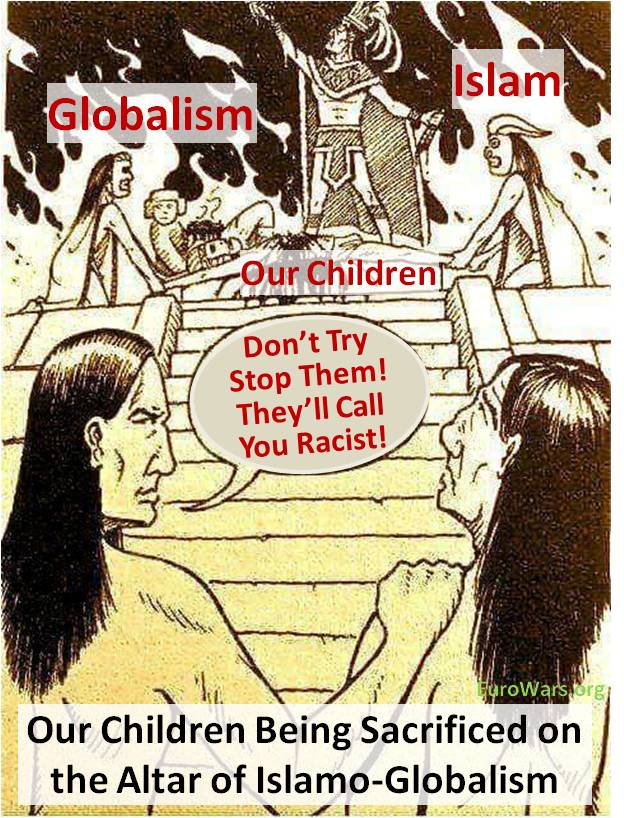 Irish are Foreigners in THEIR Own Country as European Children are Sacrificed on the Altar of Islamo-Globalism!

Irish are feeling like foreigners in THEIR Own Country! Sacrificing our Children on the Altar of Islamo-Globalism. Irish are also seen as minority, easy to oppress and they feel like foreigners in Ireland! Allastriona takes a quick look at True Irish History and some of the weeks News…

They are trying to destroy the middle class to create a low wage society which they can control. Their control of the media allows them to control the thoughts of people. For instance there has been no mention of the Global Migration Pact in the media which will be signed on 11 December in Marrakesh which will effectively give complete control of the Irish borders to the UN. It is unquestionable that the Irish Occupation government will sign up to it.

All European leaders are pawns just play acting, they are just following instructions, herding the young people into totalitarianism.

The anchor babies scam still goes on and is called the “scheme that doesn’t exist” by government officials despite a massive rejection of this in a referendum.

At what point do YOU say stop?

The Irish EU Occupation regime will not protect us.

Unless We Discriminate Against Criminals, Rapists and Murderers, Our Society is Dead. Irish EU Regime (FG/FF/SF) Raping Irish Society With African and Asian Migrants Whilst Virtue Signalling Extreme Marxism

The Guardai are incapable, unequipped and too scared of dealing with African Gangs in North Dublin. All are too scared of being labelled as a racist even if it has nothing to do with racism.

While the Irish EU regime (FG/FF/SF) has been closing police stations whilst importing dangerous third worlders hand over fist, before the deadline for them to be eligible to vote next year, forcibly inserting then directly into our communities. That is Rape.

The Irish are indeed walking dead or asleep because if the EU occupation government has their way, the Irish will soon become extinct.

The “New Ireland” is NOT Ireland, it is EUland. A Globalist Hellhole with no values, no identity, no morals, no history, no culture, no heritage and no future.

To the EU and traitorous national leaders, the means is irrelevant, all that matters is the end goal, the destruction of the nation states through enforced racemixing and religious mixing and cultural mixing and mixing of customs and traditions…

The entire political establishment, biased media and left wing apologists are dead quiet about Islam and quietly allowing it to go ahead…

Listen in every week night to hear Alastriona Nic Arcail’s Banríon Show where she says it like it is, on Irish News Radio at 8PM

In order to remain fully independent and not compromised or subservient to globalist advertisers or special interests, IrishNews.net relies on our readers, listeners and viewers for funding and support and we thank you for your patronage and patriotism.

Please do consider making a donation, once off or regularly per month via:

Alternatively please consider booking your Rental Car hire or Hotel booking from the search forms on our website.

All proceeds are used to grow and promote our platform and service.