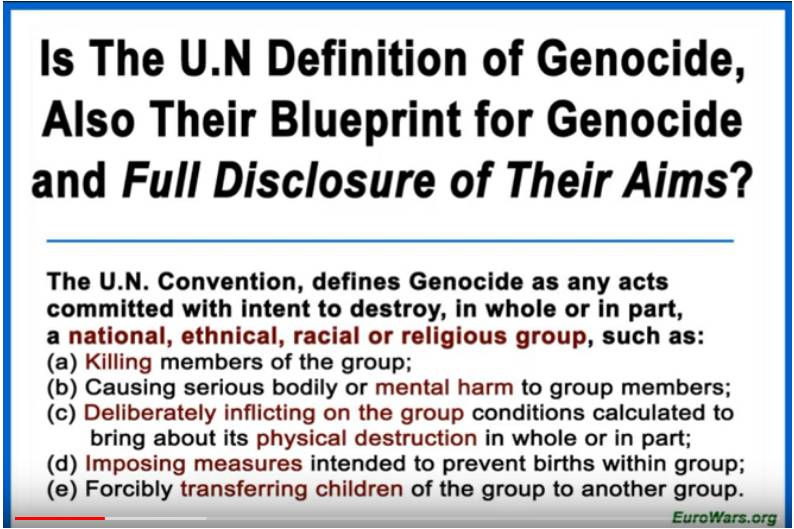 Ireland is Being Conquered by just ONE Word! One Word which allows them to commit Classic, Text Book, UN Defined Genocide to be perpetrated upon the Island Nation!

Whilst so called anti-racism, which is merely a cloak to achieve world Supremacy has destroyed most Western nation States,  racism would have SAVED Ireland and Europe. Will racism however save China, Japan, Israel, Saudi Arabia, etc. from the World Supremacist Left?

The United Nations and European Union have been waging a war against European Nations and have now declared war on China, Japan, Israel, Saudi Arabia and ALL homogenous populations worldwide, including the majority of Africa:

In 2016 the Vice President of the EU and a top UN Official stated categorically, that there would be no homogenous population allowed to exist anywhere on the planet!

The Earth, I am sure shuddered, as did I.

Make no mistake, the World Supremacists have no problems with starting a war with China, Japan or Saudi Arabia or any other homogenous “racist” nation. Israel, no one dare discuss, because of a certain word…

Is there a reason behind Donald Trump’s harsh line on China and Iran and close ties to Israel?

BUT, those who use anti-racism as a tool to achieve World Supremacy, do not need to attack homogenous countries like China or Japan, not militarily anyway. Like we can see in Europe and USA, once the Establishment propaganda behemoth of fake news mass media, Oligarchs and the political Elites gets rolling, and the sowing of white (or Chinese or Japanese) guilt, and the lure of a false moral high ground is launched, for all those weak of mind that have traitorous libtard leanings, to succor upon, one wonders, will China, Japan and Saudi Arabia, etc. prevail, and how will it resist the destruction of its social fabric with hedonism and materialism which a “Liberal World Order” will introduce (enforce), under the guise of “liberalising” their economy and “integration”?

Let me be very clear, I am not for a moment saying people should not be allowed to racemix. Indeed it should be a free choice, but at the very least an informed one. Currently there is no such thing as an informed choice available because simple discourse on the topic is taboo and certainly any scientific investigation is quickly defunded, shut down and castigated with THAT word.

Europe always has been a white continent and native Europeans have as much of a right to a homeland, and a secure future in that homeland, where their culture and heritage can be practiced and defended and lived, as San Bushmen have a right to Africa or Asians have a right to Asia.

This great crime against humanity however, is in the banning and demonising of freedom of association. Why are homogeneous populations not allowed to exist if they so choose? It has been the status quo for hundreds of thousands of years. Trying to change it in a few decades is genocide on global scale. Yes, I know, the World Supremacists tell themselves it will only hurt for a generation or two, thereafter the world will be “peaceful” – and compliant and enslaved and at risk because there will be no diversity…

No one can argue that enforced racemixing is worse than enforced separation (apartheid), because it involves the deliberate physical destruction of populations which is pure text book genocide even according to the United Nation’s own definition of Genocide:

UN defines Genocidal acts to include:
• Acts that could be obvious “elements” of the crime of genocide as defined in Article 6 of the Rome Statute, such as killings, abduction and disappearances,torture, rape and sexual violence; ‘ethnic cleansing’ or pogroms;
• Less obvious methods of destruction, such as the deliberate deprivation of resources needed for the group’s physical survival and which are available to the rest of the population, such as clean water, food and medical services;
• Creation of circumstances that could lead to a slow death, such as lack of proper housing, clothing and hygiene or excessive work or physical exertion;
• Programs intended to prevent procreation, including involuntary sterilization, forced abortion, prohibition of marriage and long-term separation of men and women;
• Forcible transfer of children, imposed by direct force or through fear of violence, duress, detention, psychological oppression or other methods of coercion; (In South Africa White People are not allowed to request a white child for adoption and are forced to adopt black children).
• Death threats or ill treatment that causes disfigurement or injury; forced or coerced use of drugs (like Nigerians streaming into white suburbs with drugs), or other treatment that damages health.

However, we live in a time where racism is treated as a worse crime than rape and murder.

Just why is the West falling head over heals and committing suicide through racemixing by deliberately importing millions of Africans and Asians for no logical, sensible, provable, legitimate reason?

That is right, there is no reason whatsoever that can substantiate the argument to welcome refugees and migrants, all of them fall flat on closer inspection.

Rescuing refugees? No, that is a lie! We can house 12 refugees in the Middle East and Africa, closer to their homes, in more compatible environments for the same cost of every one we inflict upon ourselves in the West! This was proven by the RC Church in Italy. What? suddenly cost and economics is no longer a consideration?

The Establishment, Corporations, Elites, Usurers and Rich Plantation owners used to buy slaves from Ireland and then Africa hundreds of years ago, to come work on their enterprises and make more profit and wealth for them.

have we learnt nothing from the Slavery era? One which WHITE people brought to an end despite the protestation by black and jewish slavetraders.

Today, the very same sector of society is willfully promoting and facilitating and encouraging the importation of “workers” from Africa and Asia to come work in their factories, to create more profit for them uy working for lower wages and putting locals out of work. These African and Asian workers are groomed, lured, tempted and even have transport provided for them by the Italian Navy, Coastguards and many traitorous NGOs

Clearly the Slavetraders have upped their game and realised that you do not need slaveships or chains or whips if you make it attractive for the worker migrant slaves to come of their own accord. Indeed Netherlands offering 10,000 Euros shopping sprees is one of many examples of blatant deliberate grooming and solicitation of African and Asian migrants to come to Europe. Who would not come for a free house and social benefits dished out to you entire extended family. Certainly this is the promised land and paradise all in one?
To make it even better, you can commit any crime, even raping a child and you will not be persecuted or punished!

Get mad and get up and get even…