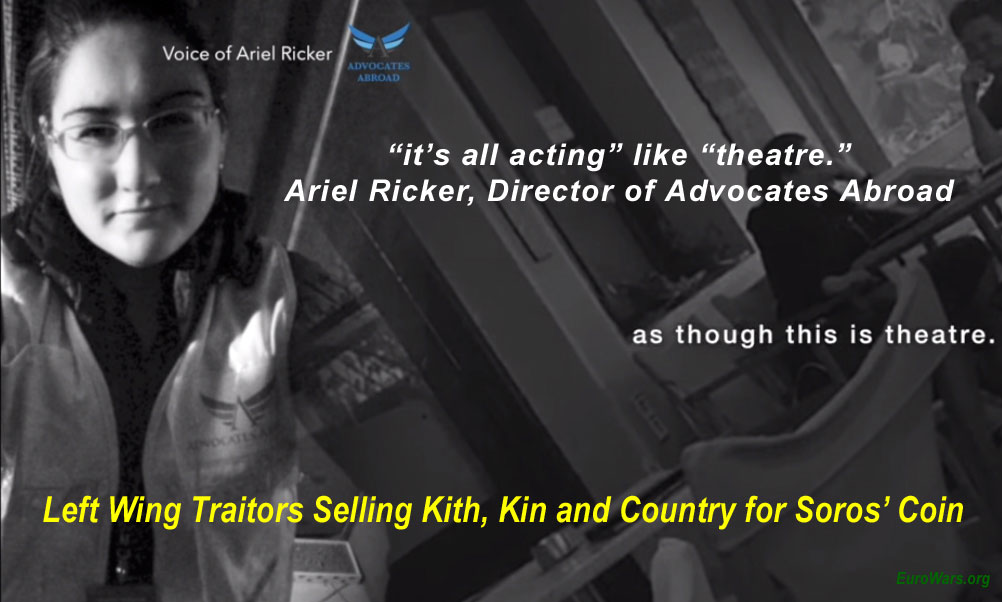 Undercover reporting from Lauren Southern, for her upcoming documentary Borderless, shows Non-Governmental Organizations (NGOs) training Muslim migrants how to lie about trauma they have allegedly experienced, and about being Christians in order to gain asylum status in Europe amongst other things. It is well known George Soros funded the printing of maps and guides with phone numbers for these left wing NGOs so the migrants could call them the moment they land (that is why they all have a phone when they arrive and guard it with their life)!

Ariel Ricker, the director of Advocates Abroad, which is a left wing group staffed by legal experts who help those seeking asylum, is heard admitting that “it’s all acting,” and is akin to “theatre.”

In one part of the undercover video recorded in Greece, Ricker is heard giving an example of a story she would feed to an asylum seeker.

“In December 2017, in Izmir, Turkey I was threatened for being a Christian because my boss and his friends jumped me when I was leaving my church,” Ricker makes up. “This is the Bible they tried to tear up (referring to a prop they would be given), this is the crucifix I was wearing that they tried to tear, and it made me feel unsafe as a Christian in Turkey.”

The stories are well thought out, as it includes a prop, an event, date, and location. Ricker explains that is necessary in order to ensure asylum is granted, as it is a very specific answer that meets all necessary criteria.

While this story was made up on the spot, the stories generally fed to asylum seekers all fit the same criteria. Ricker even explains how they have a “fill in the blanks” section where fake stories can be made up much easier.

This is all a part of a full-length documentary being created, starring Southern, about the European Migrant Crisis.

Already, this one segment of the movie has warranted a feigned response from the globalist United Nations Refugee Council, who call the video (not the allegations) “alarming.” It is almost certain the UN is well aware of these disingenuous activities, given that they hope to flood all white nations with as many migrants a possible…

BREAKING: The United Nations Refugee Council has responded to our report, calling it “Alarming”. pic.twitter.com/YrkysXZDqF

The movie, BORDERLESS, will go into further detail on illegal NGO support for Islamic migration, as well as interviews with human traffickers. It is a project which is extremely dangerous to produce, but is described as one that will “blow the European Border Crisis wide open.”

Veil of Secrecy Around Illegal Migrants and Direct Provision, Ripe For Fraud, Corruption and Vote Rigging!