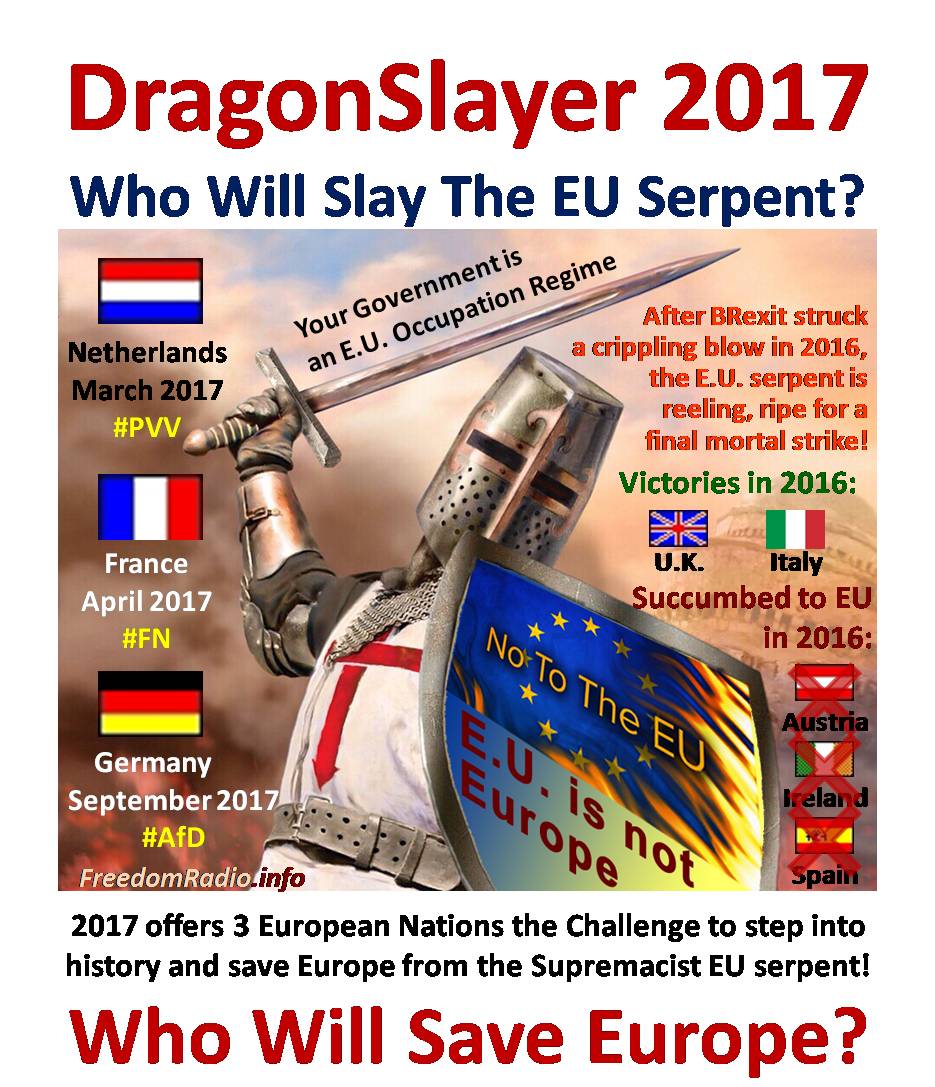 EU Slayer 2017 – Will Netherlands, France or Germany Save Europe from the Supremacist Genocidal EU? #EUslayer

BRexit has shown the courageous way forward and like in the Second World War, akin to D-Day, they landed the first victory that turned the tide of the war against the Supremacist EU.
Will the once proud European Nations once again follow their lead and will it be the Dutch, French or Germans that strike the killer blow to finally put the abomination that is globalist EU Supremacy and Capitalist profiteering from Usurers and Banksters to an end?

The EU is not Europe and like a snake, it has slithered and beguiled its way into ruling the European Nation States without the consent of the people. Despite no votes from Ireland (twice) and Netherlands, Greece etc.

The EU has lured nations into its trap with property bubbles, easy cheap loans and fiscal indulgence and then turned the carrot into the stick of enforced union and conquest.

However European Nations are now Uniting to fight off this evil den of Usurers, Supremacists and Establishment Elites who have pure self interest in mind.

Netherlands are the favourites thus far to take the Serpent Slayer title. They have a General Election in March where the anti EU party of Geert Wilders (the “Dutch Trump”), PVV, have promised to hold a referendum on EU, is the favourite.

If the Dutch fail to strike the killer blow against the EU serpent, which will no doubt use its usual mix of giving out “economic cookies” and using blackmail and threatening doom and gloom, the French have a General Election in April where the Euro skeptic Front Nasionaal of Marine Le Pen is neck and neck favourite with the left wing Republican party (who pretends to be centre right). In fact the socialists have vowed to vote for the cucked Republican party to keep Le Pen out which indicates how cucked and pro Establishment the Republican party is.
Le Pen however has a secret weapon of potential Trade Union support with Trump like re-invigoration and repatriation of French industry like car makers.

If that still fails to kill the Supremacist Socialist EU serpent, then Germany, the strongest power in the EU and current biggest victim of its enforced racemixing policy, have General Elections in September where the new Euro Skeptic Alternative for Germany (AfD) have made great gains, but also have to face the duplicitous traitorous socialists and so called christian democrats of Merkel (CDO). There is nothing christian about a party that promotes Islam more than it does Christianity and enforces mass immigration and other policies rather than allow a referendum… 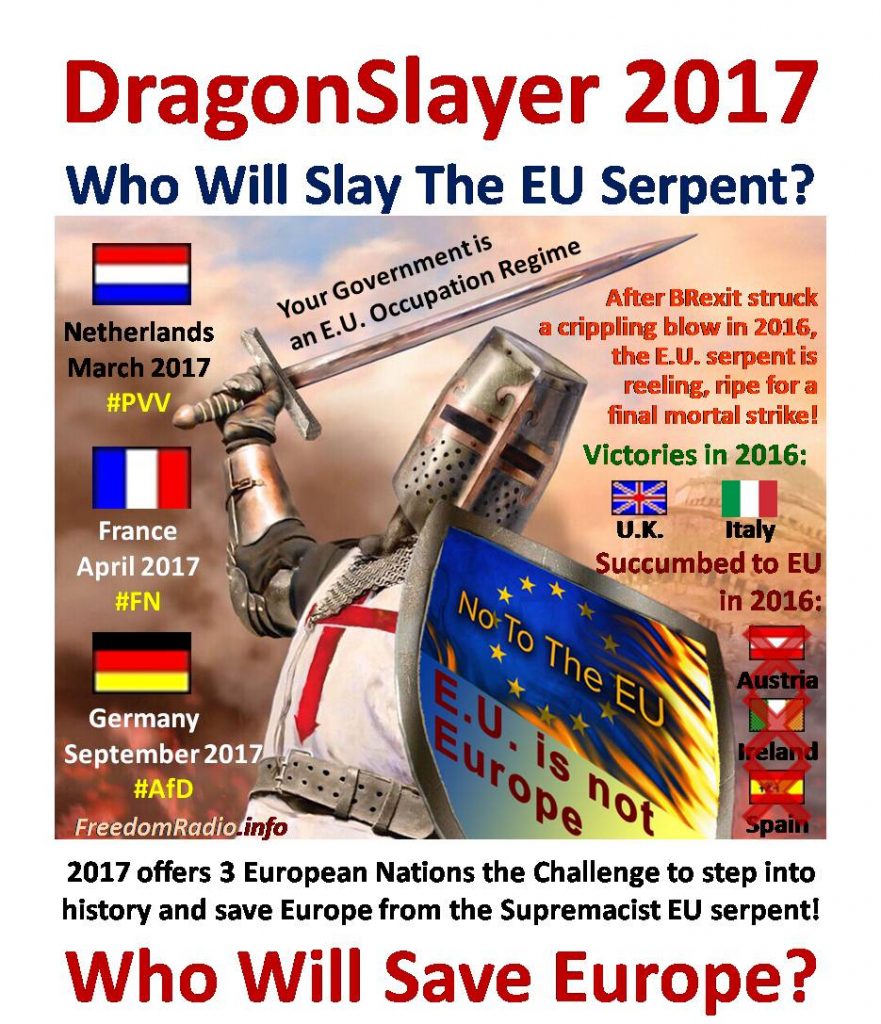 The Czech Republic also has an Election in September and although their rejection of the EU will not make much of a material difference, they are however not as indebted, and thus enslaved, to the EU as the “PIIGS” Nations (Portugal, Ireland, Italy, Greece and Spain) are. Clearly the EU serpent has purchased (through bailouts and loans, the needs for which were seemingly deliberately manipulated using well tried and tested communist socialist tricks) and thus fabricated consent on a massive scale in order to legitimise itself and take over power.

The former President of the Czech Republic, Vaclav Klaus hinted at the use of the Dialectic and other nefarious manipulations when he recently said on RT: “I am a very known critic of the European integration process, everyone knows it, so it will be no surprise to hear from me that I am not so happy with what has been going on… this process has been switched, transformed by the Maastricht treaty, 25 years ago, and especially now by the Lisbon Treaty, later, to something totally different…
This was the beginning of the negative, wrong development, as I see it.”

If the once proud and brave Dutch can find their courage (not beer) and roots again and send the pro EU parties packing, we could get rid of the serpent much sooner and a United Europe (not merged and not mixed) can stand shoulder to shoulder and help each other and work to make the world a better place for all, not just the elite few.

Hup Hup Holland, Alles Alles France and Achtung Germany! There is work to be done! 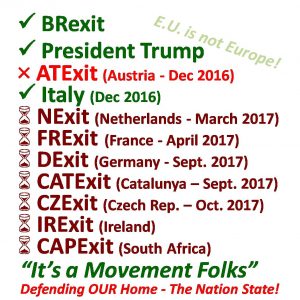 See also: Trump and BRexit leaves World Supremacists Obama, Merkel, Hollande and EU panicking on the wrong side of History

Can Trump Stop War? The NWO Establishment want WAR again, and like WWII, despite Hitler pleading for peace, the Allies wanted war.