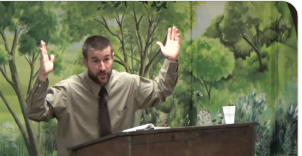 A controversial American Baptist pastor has been banned from preaching in the Netherlands or from entering Europe’s 26-state Schengen Zone, over his extreme views against the LGBT and Jewish communities.

Steven Anderson, who once praised the mass shooting at a gay night club in Orlando, was due to preach in Amsterdam on May 23 as part of his European tour, which also included public events in Sweden and Ireland. Concerned over the pastor’s well-documented hate statements, gay rights advocates and a number of MPs urged the Dutch government to ban him from entering the Benelux country.
​
On Wednesday the government adopted “measures” barring the 37-year-old pastor from entering the Schengen Zone, a 26-country area of Europe where visa-free travel is allowed.

The government is “taking strong action against extremist speakers who, by spreading their beliefs, restrict the freedoms of others or even incite hatred or violence” State Secretary of Justice and Security Mark Harbers said, without providing further details.

​
Anderson, who has yet to receive official notice from the Dutch regarding his ban, slammed Amsterdam’s decision which is preventing him from “teaching the Gospel.”

“If they are going to reject a Bible-believing creature from coming and preaching the word of God, then it’s their loss,” the pastor said, warning the Dutch that they’re “going to end up the same way [as] Sodom and Gomorrah,” code for sinners being destroyed by God’s wrath.
​
The California native is no stranger to being banned from countries. Jamaica, South Africa and the UK have barred from him from entry in the past. He was also deported from Botswana, all because of his hate speech.

Anderson is a well-known Holocaust denier and an avid anti-gay activist, who is also not shy to speak out against abortion rights. The preacher celebrated the deaths of 49 people by a lone-wolf gunman at Pulse nightclub in Orlando in June 2016, by posting a now-deleted YouTube message claiming it was “good” for “disgusting perverts and pedophiles” to be murdered. He also reportedly advocated executing homosexuals by way of a firing squad because that’s what the “Bible commands.”

The pastor from the Faithful Word Baptist Church in Tempe, Arizona also rejects abortion rights, preaching that “women are to remain in the home” to raise children. The American often criticizes Jews in his sermons on YouTube. He hasn’t been banned from any of the social media he has accounts with.

What Will Become of the International Space Station?