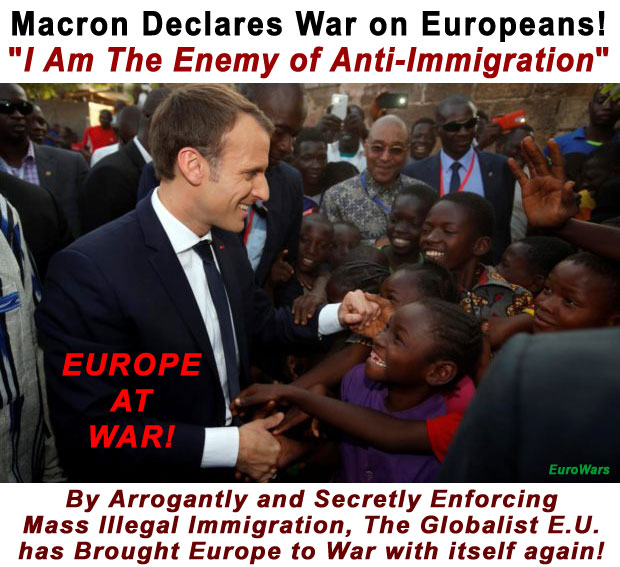 French President Macron has declared war on Europe and has said leaders of Hungary, Italy and other patriotic nations were right to see him as their main opponent, thereby upping the ante in the bitter European debate over mass immigration policies. Hungarian Prime Minister Viktor Orban and Italy's Interior Minister Matteo Salvini on Tuesday launched an anti mass immigration manifesto aiming at next year's European parliament elections, and countering the opposing camp led by the French and German presidents. "There are currently two camps in Europe and one is headed by [Emmanuel] Macron," Orban said at a press conference after holding talks with Salvini in Milan. "He is at the head of the political forces supporting immigration. On the other hand, we want to stop illegal immigration." E.U. countries are expected to go to the polls in May 2019, and Salvini has aligned himself with some of the patriotic "Visegrad" countries: the Czech Repub
August 30, 2018
6
0 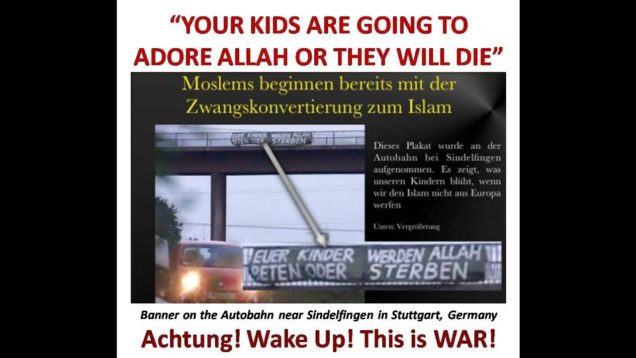 Germans Have To Integrate With Migrants! Only 2 Kids out of 25 Are German in Local Nursery School!

A German mother has taken to Social Media to express her shock, fear and concern with a polarizing viral video which seems to have hit a chord as it received 2 million views. The mother of a 3-year-old boy, who ironically wears the liberal trademark pink hair, complains that her son cannot socialize with other kids in a public nursery, as only two out of 25 can speak German yet all foreigners can communicate with each other in their language. This situation is not unique either!
In a Facebook video post filmed on August 15, the mother, Leen Kroetsch, takes aim at German politicians for what she claims is a botched immigration policy which is forcing her 3-year-old, who has no immigrant background, to adjust to foreign and alien environment in the daycare center. Kroetsch claims that out of 25 children, her son's group consists of only two without an immigrant background and who can speak
August 28, 2018
1.56K
20 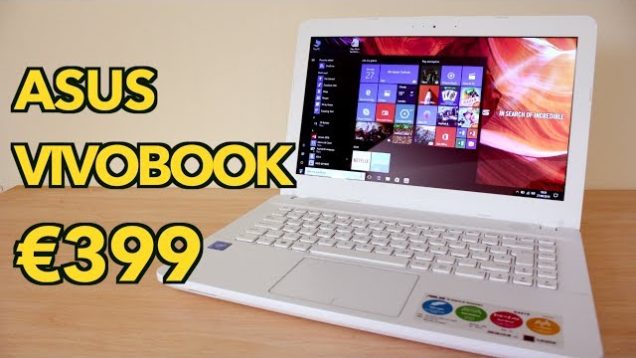 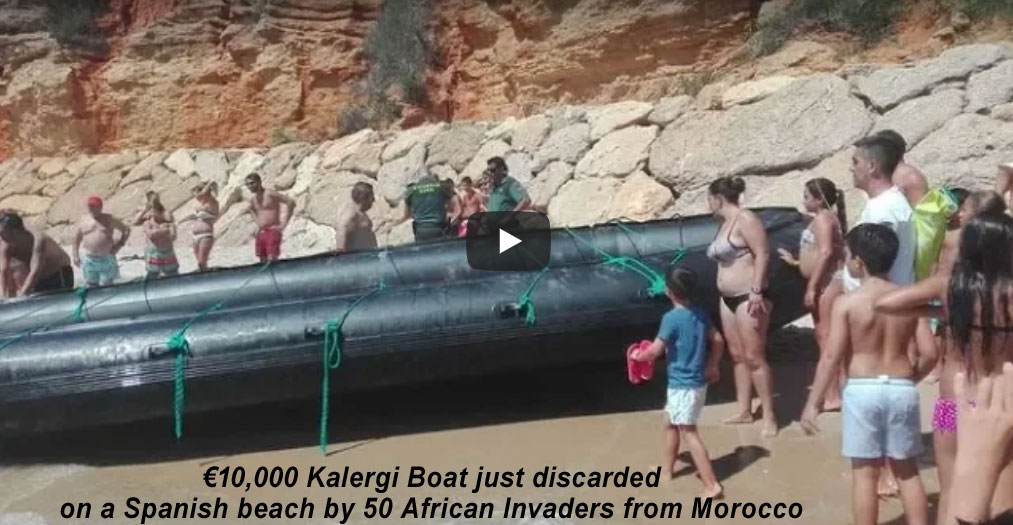 Yet another video has appeared showing dozens of migrant invaders landing on a Spanish beach in a "Kalergi Boat" (semi inflatable Zodiac boat supplied by human traffickers) and in an organised pre-planned fashion jogging off in single file towards the cliffs, leaving beachgoers shocked and nonplussed at the clinical execution of the attack. The stunned tourists could only muster jokes about them heading to the nearby luxury hotel to get to the all-inclusive hotel service probably all paid for by the supremacist EU and left wing Oligarchs who promise these invaders free handouts and cash for life, which they are actually getting at the expense of the European taxpayers! With the closure of the route through Italy, thanks to the election of the patriotic government of Matteo Salvini, Spanish beaches are becoming a frequent destination as the continents are separated only by the 30 miles stretch of the Strait of Gibraltar. You might ask why this route was not u
August 27, 2018
7
0 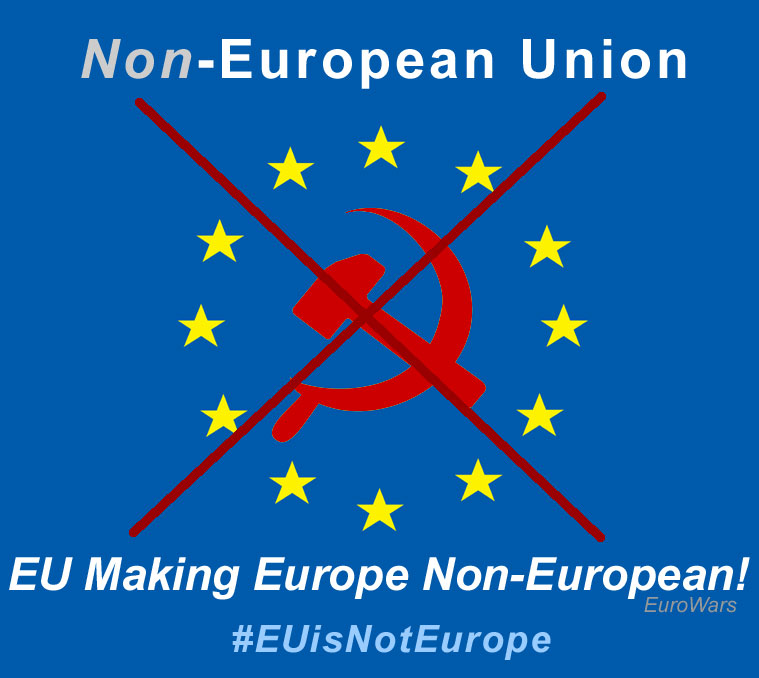 Showing its desperation to suck up to the EU, the Irish Government was the only European government to break ranks and offer to take some of the "refugees" in the standoff between Italy and the EU. Italy was attempting to force EU to reform its genocidal, inept and grossly corrupt policy on mass immigration. Italy's Foreign Minister and Deputy PM, Matteo Salvini, has been holding the standoff since Monday, demanding the EU step up to the plate. Apart from pointless rhetoric, calling Italy "unhelpful", the EU unhelpfully did nothing... During the week long standoff Salvini had said “The next ship can turn around and go back where it came from because our limit has been reached!”  Rome had even threatened to pull funding for the EU unless it agreed to take in some of those on board the Diciotti. On Sunday, after Ireland had offered to take in some of the migrants, Italy finally disembarked all 140 migrants from the "rescue" ship that had been docked
August 26, 2018
6
0 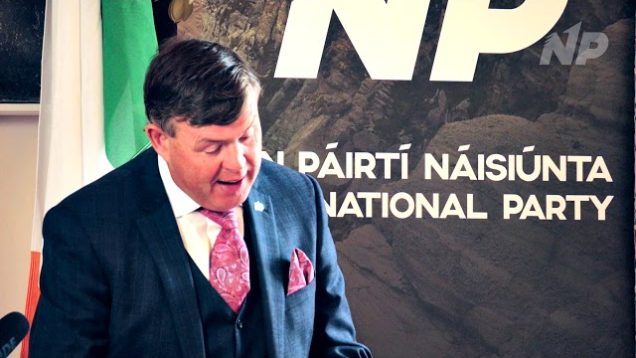 James Reynolds – Ireland Is Being Ravaged by Mass-Immigration 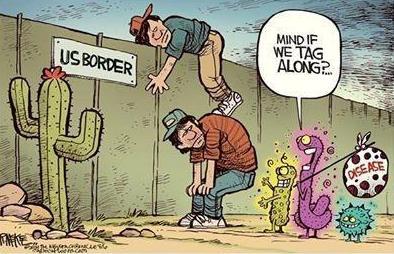 Health experts are warning that a potentially lethal parasitic disease from South and Central America, spread by ‘kissing bugs’ has taken hold in the US and Europe, with more than 300,000 Americans contracting it. This news comes at the same time that a record-breaking 41,000 cases of measles have been registered in Europe so far this year resulting in 37 deaths, according to new statistics provided by the World Health Organization (WHO). The figure is almost double the then-record breaking number of 23,927 cases recorded in 2017. This will put an even heavier strain on the already struggling Health Services in Western nations as exposed by a nurse in Germany.
Although measles vaccination rates
August 25, 2018
3
0 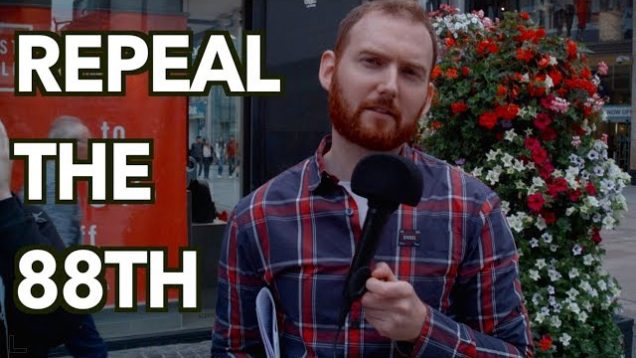 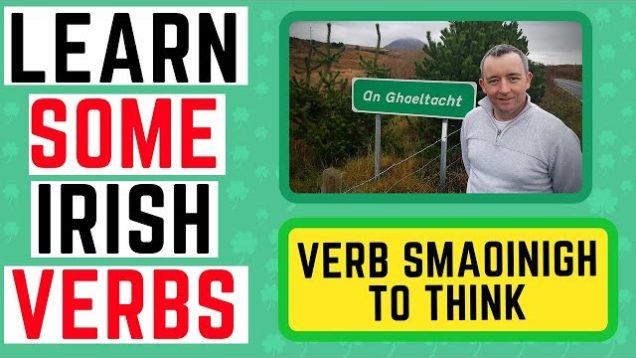 How To Learn Irish – Verb Smaoinigh – To Think

In this Irish language video I will explain a little bit about the verb Smaoinigh and I'll show you some phrases you could use in conversation. If you are wondering how to learn Irish then please subscribe to my channel for regular video tutorials on this beautiful language.
August 24, 2018
3
0 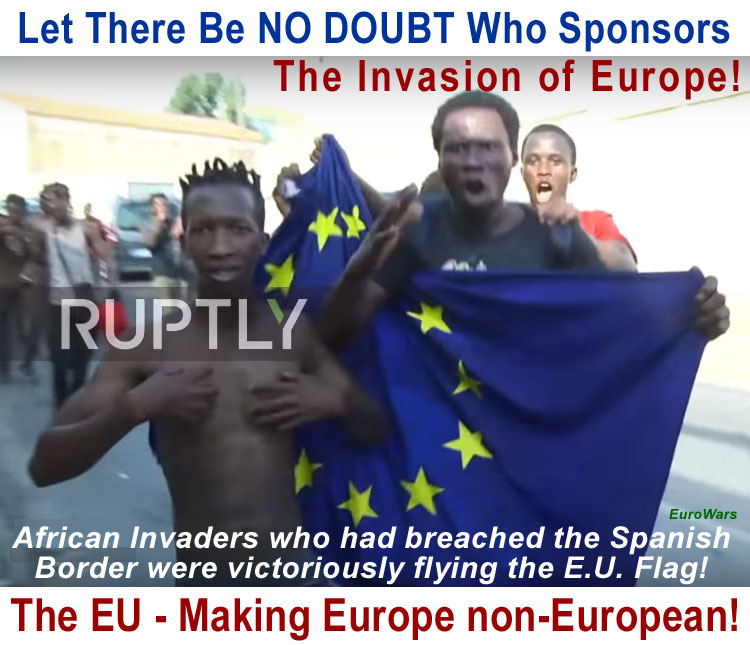 The Invasion of Europe Moves to The Spanish Front as Troop of 300 Africans, Flying EU Flag, Attack Morocco-Spain Border Post

Only weeks after the last attack, Africans have once again launched an attack on a Spanish Border Post in Cueta in what seems to have become the new focal point of the invasion of Europe. Flying the EU flag with victorious shouts of "Boza!" (victory!), they ran through the streets. Spain has now overtaken Italy as the top target for human traffickers ever since Italy's  patriotic leader Matteo Salvini stopped allowing migrant invasion parties to enter Italy. With its new Communist government, Spain is now a week point in Europe's defenses and the invaders and their treasonous enablers have shifted their tactics accordingly.
Seven spanish guards suffered acid and lime burns as more than 300 Africans attacked, even hurling excrement, they tried to enter European territory by storming the fence on Tuesday night. Press reports state that as many as 200 sub-Saharan Africans successfully penetrated the border fence that separates Moro
August 23, 2018
26
0 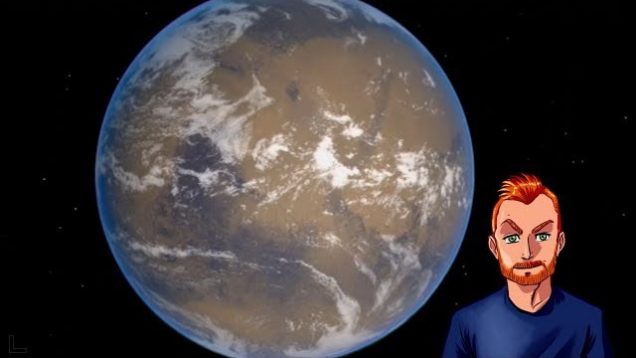 Why We Can’t Terraform Mars…Yet 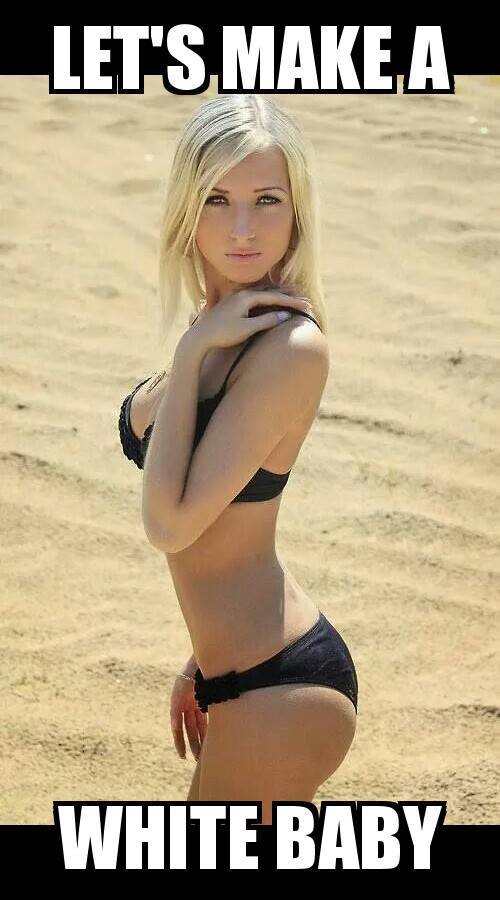 Will Taxing Couples Who Choose Not to Have Kids Be an Answer To Ireland’s Demographic and Pension Time Bomb?

Multiculturalism and Mass Immigration have not only failed to solve the Pension Time Bomb in Europe, caused by Europeans choosing consumerism over family, but has exacerbated it because migrants are generally uneducated, unemployable, disease ridden and prefer to languish on the welfare system they never contributed to. Whilst Hungary is offering free homes to parents with two or more children, Europe's liberal regimes seem to doggedly pursue the policy of aborting your own children while importing migrant children, who place an even greater burden on social health and welfare.
Singapore also tried to incentivise families to have more children but that failed as the lure of consumerism is far too strong and it failed.
Another possible solution is a new proposal to tax adults who have fewer than two children which has been muted
August 22, 2018
2
0 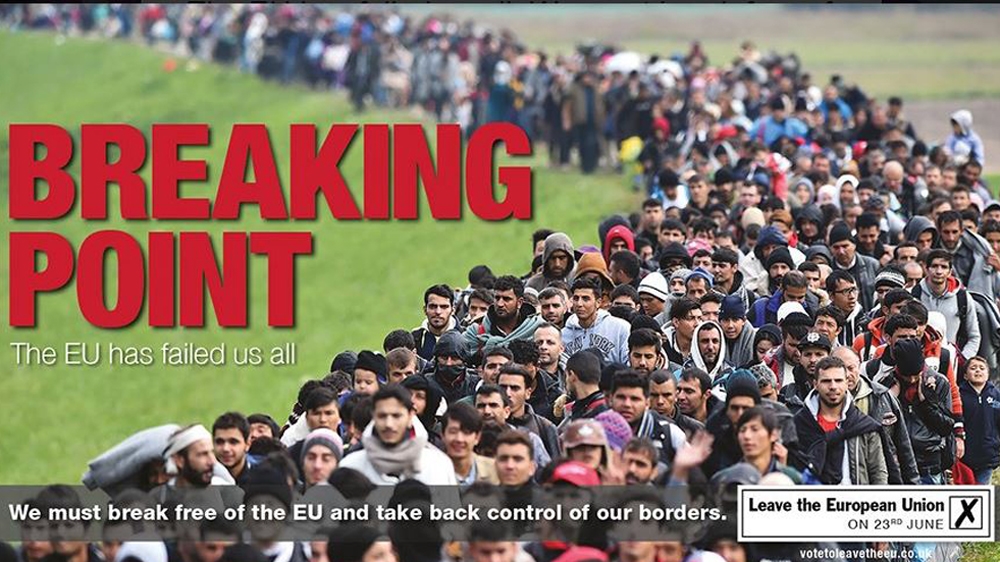 German Nurse’s Warning to The West: Migrants are aggressive, spoilt, unemployable and bring diseases. Where are Refugees Welcome Activists Now?

A nurse in Germany has sent out a warning to the West after her experiences at the hands of migrants and refugees who flooded Germany when Merkel invited them all in. "At the hospital, we had a meeting about how the situation here and at the other Munich hospitals are unsustainable."
Clinics cannot handle the number of migrant medical emergencies, so they are starting to send everything to the main hospitals. Many Muslims are refusing treatment by female staff, and we women nurses are now refusing to go among those migrants! Relations between the staff and migrants are going from bad to worse. Since last weekend, migrants going to the hospitals must be accompanied by police with K-9 units. Many migrants come to Germany because they have AIDS, syphilis, open TB and many exotic diseases that we in Europe do not normally treat on such a scale. If they receive a prescription to t
August 21, 2018
4
0 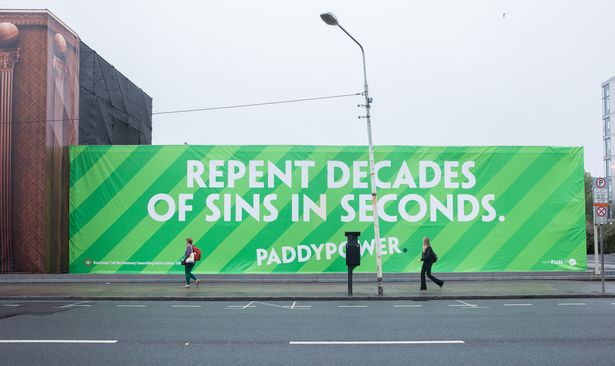 Paddypower Mocks the “Quarter of All Irish” Who Have Not Been to Confession in a Decade, but has Paddypower been?

Paddypower has built a giant drive-thru confession box outside Phoenix Park entrance after the results from a survey the bookmaker commissioned revealed that more than a quarter of Irish people haven't attended confession in over a decade.
August 21, 2018
4
0 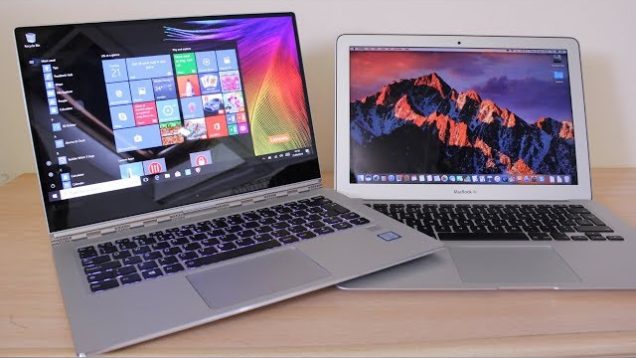